With little more than a laptop and projector, Adam Bailey tells the story of French painter Henri Rousseau, capably weaving in stories of his own upbringing and scenes from Stephen King’s Carrie. It doesn’t sound like it will work, but thanks to Bailey’s knack for storytelling you hang on his every word.

Rousseau is now considered a master, but was ridiculed by critics and the art community in his own time. He was also hopelessly unaware he was the butt of everyone’s jokes. Through his performance, it’s clear Bailey cares deeply about the man and he wants the audience to as well, regularly referring to the painter as “our Henri.” Bailey shares Rousseau’s life in a way that is so tender but so honest, it’s easy to connect to the painter.

Bailey’s not telling his own story, and yet he is. The Life Henri showcases parallels between the French art world and Canada Fringe Theatre circuit. He’s also telling the story of creative people the world over in ways that make you consider the value of art and doing what makes you happy.

If passionate and polished storytelling is your thing, The Life Henri is a tale worth hearing. 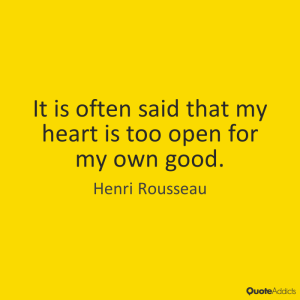